Read the following story and be prepared to discuss it in class. Please note that although the article references an old social platform, the behavior is still relevant on current social platforms. 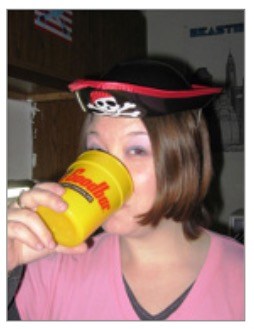 APRIL 26, 2007 — A Pennsylvania woman claims that her teaching career has been derailed by college administrators who unfairly disciplined her over a MySpace photo that shows her wearing a pirate hat and drinking from a plastic cup.  In a federal lawsuit, Stacy Snyder charges that Millersville University brass accused her of promoting underage drinking after they discovered her MySpace photo, which was captioned “Drunken Pirate.”  The picture from Snyder’s MySpace page (which she says was snapped at a costume party outside school hours) can be seen below.

In her complaint, Snyder, a 25-year-old single mother of two, says that
Millersville officials discovered the image last May, while she was a senior
working as a student-teacher at Conestoga Valley High School.  A university official told her that the photo was “unprofessional” and could have offended her students if they accessed her MySpace page.  At the time the “Drunken Pirate” photo was taken, Snyder was of legal age to drink, though her lawsuit notes that the photo “does not show the cup’s contents. ”...

Despite good grades and solid performance evaluations, Snyder claims that school officials improperly denied her a bachelor of science in education degree and a teaching certificate.  The university, Snyder added, instead granted her a bachelor of arts degree last May 13.  Because the school refuses to confirm that she satisfactorily completed her student teaching requirements, Snyder claims that she has been unable to secure certification from Pennsylvania’s Department of Education.  Snyder’s lawyer, Mark Voigt, told TSG (TheSmokingGun.com) that his client now works as a nanny.  He added that school officials should actually be “celebrating” Snyder, a mother of two young children who returned to school to get a teaching degree.

Discuss:
Brainstorm:
Create a list of questions that someone should ask himself/herself before posting anything about another person?
Wrap up by having students answer the following questions in a journal entry:

Lesson 2: Turn Down the Dial on Cyberbullying﻿

1) Watch the video below and identify the factors that contribute to online cruelty.

2) Watch the video below and identify the roles of various players in the video and describe what upstanders can do to lessen the effects of online cruelty.
3) Wrap up by having students answer the following questions in a journal entry:

Lesson 3: Oops I Broadcast It on the Internet

Over the past few weeks, Emma has developed a huge crush on José. She thinks he might like her, too. She knows gossip travels like lightning at school, so she tells only her best friend, Chantal, by texting her after school: “Do you think José likes me? I kinda have a little crush on him.” Emma also swears Chantal to secrecy over the phone later that night. Though Chantal vows to keep her secret, she forwards Emma’s text to Zeke, who forwards it to a friend, who ... you know the rest! The next day at school, one of the soccer players, Ted, texts Emma: “Emma+José=so adorable.” Emma is shocked and embarrassed because she told only her best friend, and then swore her to secrecy.

My Secret Diary ... Sort Of

Tommy has been writing a blog about his life that he thought was pretty private because he used a username that wasn’t his real name. But when his parents ask him why he decided not to try out for the basketball team, Tommy figures out that they have been reading his blog, because it’s the only place he describes being picked on for being so short. Tommy is annoyed and surprised because he never told his parents about the blog and certainly didn’t give them his username to access it. His blog is technically public, but he didn’t think anyone could connect his blog with the “real” him. Tommy later finds out that his best friend’s parents told his parents about the blog.

4) Wrap up by having students answer the following questions in a journal entry: